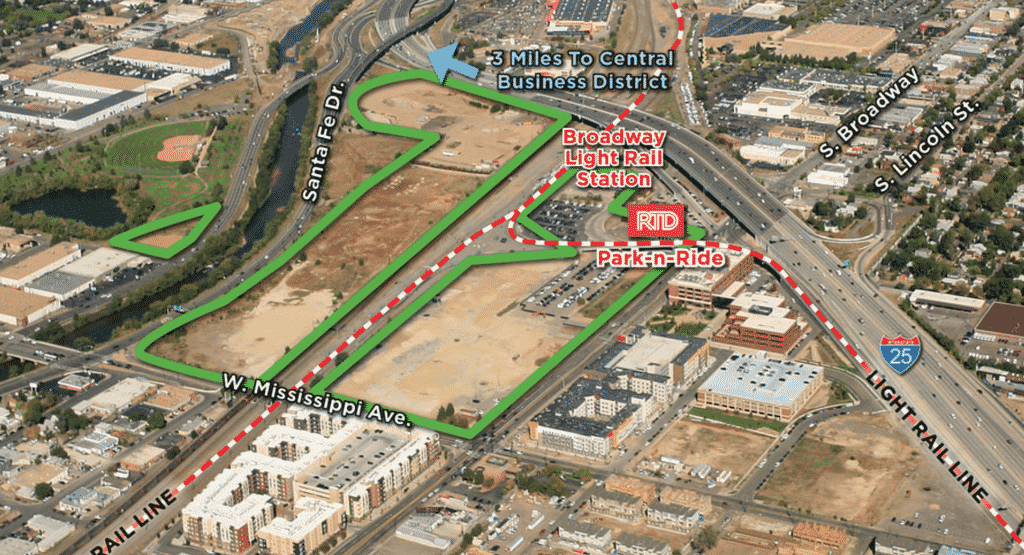 Part of the 41-acre Broadway Station development site in downtown Denver has been sold.

BSP West LLC owns the western portion of the Broadway Station development site, which is bounded by Interstate 25 and Mississippi Avenue to the north and south, and the railroad tracks and Santa Fe Drive to the east and west.

Both procuring entities list a Boston office address that matches that of real estate company GID, which, according to its website, develops and/or owns multifamily, mixed-use and industrial properties.

The company did not respond to multiple requests for comment. Jim Capecelatro, a Cushman & Wakefield broker who markets the site for residential development, declined to comment.

The two plots that were sold are known as plot G and plot I, according to the deed of sale. The legal descriptions of the parcels match what county records show as 957 and 1007 S. Cherokee St., which combined are approximately 4.8 acres.

The Broadway Station website shows the plots – which are zoned up to 16 stories – are for residential development. And a Davis Partnership Architect staff member submitted a concept plan to the city for the site last month, proposing two residential buildings, records show.

The eastern half of the Broadway Station development site is along Broadway south of Interstate 25. Austin-based Endeavor Real Estate Group paid $42 million in two deals in 2019 for land of this side of the site, saying at the time that it was partnered with Denver-based Legend Partners on development efforts.