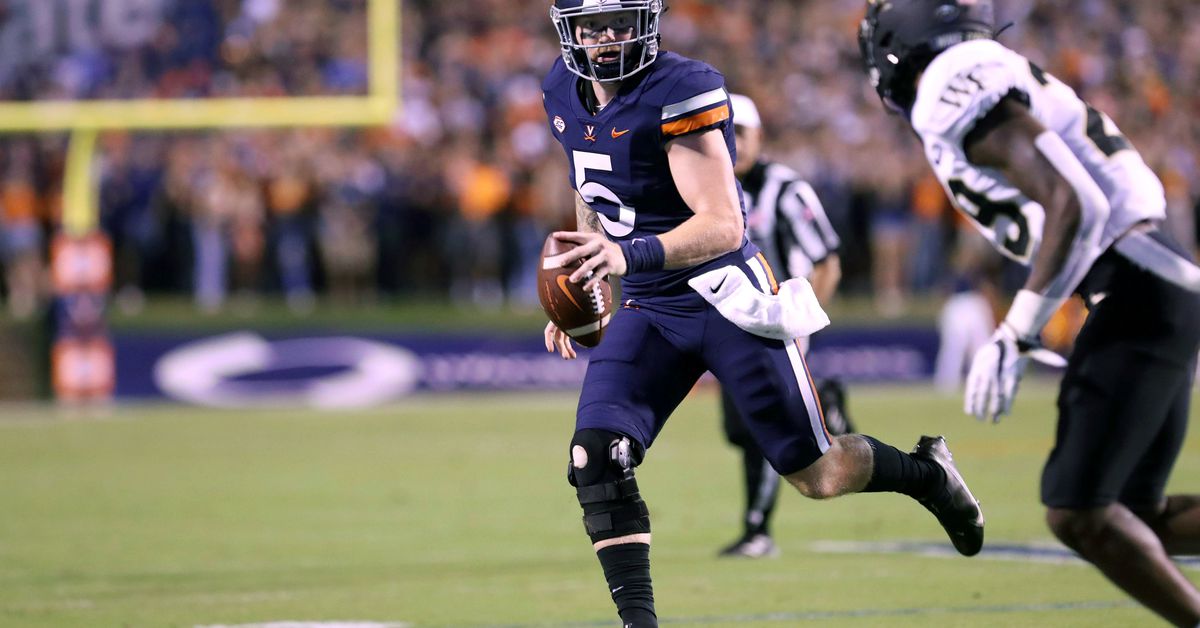 In an even more demoralizing game than last Saturday’s loss to North Carolina, the Virginia Cavaliers embarrassingly lost their second ACC game of the season to the Wake Forest Demon Deacons, 37-17.

Brennan Armstrong was impressive for the fourth straight week as he threw for 407 yards on 33/59 passes with a pair of touchdowns and 33 rushing yards. But, following the trend of last Saturday, he has had little to no help from his running game and defense.

This defense had a less than ideal start to the game as the Demon Deacons threw an efficient nine-game play, 2:09, 75 yards topped in a 39-yard touchdown wide open for Taylor Morin as the ‘Hoos called. for a glaring breakdown in the secondary.

In response, Brennan Armstrong methodically walked the Cavaliers onto the field with a pair of Dontayvion Wicks clutch third-down catches and a happy defensive call that kept the drive alive. But, with seven games inside the 10-yard line, including a fourth and a four-goal, Virginia came away empty-handed and handed possession to the Demon Deacons.

That lack of points would prove to be costly, as Wake relied on running play and running back Christian Beal-Smith as he chained game after game and Sam Hartman drank and dived down the field. Fortunately for the UVA loyalists, the Wahoos stopped Demon Deacon’s practice on the Virginia 28-yard line and forced a field goal that limited the deficit to 10-0.

Finding themselves in a similar hole early in the two-stroke game they faced last week against North Carolina, the ‘Hoos quickly roamed the field behind Armstrong’s seven straight passes. But, again, Virginia couldn’t convert inside the 10-yard line as the Demon Deacons defense pissed Armstrong two yards off first on third and five. This time around, the coaching staff opted to kick as Justin Duenkel made it 10-3 with a 21-yard boot.

This shift to the conservative play call wouldn’t pay off, as the Demon Deacons unleashed another seven-point drive aided by a 63-yard run from Judge Ellison and a fourth and short inside-line conversion. of the five yards. After that play, Ellison finished training exactly as he had started as he hit Virginia’s defensive front for a one-yard score.

Down 17-3, the offense collapsed on the next drive as a pair of sacks and an expensive restraint call on left guard Joe Bissenger handcuffed Armstrong and company. From there, Jacob Finn sent the game’s first punt for 43 yards to Wake’s 25-yard line.

Wahoo’s defense then bowed to pressure from Hartman and Wake’s hasty attack. But, critically, it didn’t break as the “Hoos stopped the Demon Deacons from advancing” at the Cavaliers’ five-yard line and forced another field goal.

With 1:31 left in the half and Virginia on the verge of receiving the second half kick-off, there was potential for the Wahoos to pull out the contending game with a score to close the match. first half and open the second. But, rather than having pace, Armstrong took two sacks and was downed a third time just before half-time to dispel any hope that Virginia could get back into the game sooner rather than later.

Despite a failed catch on the kick return and a near interception on the first scrimmage game, Armstrong and the Wahoo offense got off to a good start in the second half. The Ohio native setting a pace early in practice, he rushed for a 31-yard run after dodging pocket pressure and securing a few key blocks on the field to put Virginia in goal position. . From there Armstrong shot a dart at Jelani Woods in the middle and the big man took care of the rest by shaking a Wake safety and stepping into the end zone to bring the score to 20-10.

But any momentum Virginia built up from the opening half-time practice was quickly smothered as Sam Hartman and the Demon Deacons unleashed an 83-yard drive, including a fourth and 1-to-1 conversion. inside the red zone to extend the advance to 27-ten. Wake’s touchdown came on a wild slam, in an end around the field to Hartman before the senior quarterback found a wide-open Blake Whiteheart in the corner of the end zone.

In response, Armstrong made up probably his most impressive workout of the night as he pushed the ball into the field and found Ra’Shaun henry for a 15-yard gain, Jelani Woods for 32, then Dontayvion Wicks on a post for a gain of 22 meters. score an absolute ball from a pass.

To delay any swing from Virginia, the Demon Deacons responded in turn with another long haul culminating in a 12-yard touchdown from Hartman to AT Perry. Wake’s relentless offense once again proved too much for the UVA defense as Hartman remained efficient and smart in the red zone to pass the Cavaliers, 34-17.

From that point on, Virginia played like a defeated team as she went down to three on the ensuing drive before Wake easily descended onto the pitch before the ‘Hoos held back the deacons on. the 17-meter line and to another field goal.

While Brennan Armstrong did all he could to put more points on the board, the Wahoo quarterback and offense couldn’t overcome a 15-yard personal foul penalty from Ra’Shaun Henry and returned the ball to the Demon Deacons after failing to convert the 4th and 17th from Wake’s 33-yard line.

After that, the Virginia defense forced a punt for the first time in two games as Wake Forest had three goals and an out. The Cavaliers stuffed Ellison on the first down, gave him four yards on the second, then Nick Grant dropped a potential interception on the third down, but still did enough to keep the deacons from resetting the lows.

After an incomplete first down, Armstrong was sacked once more on the second down before finding Wicks for an 11-yard gain on the 3rd and 17th. With offense remaining on the pitch, Billy Kemp IV hit a stick pass, turned it into a 27-yard gain, but then spat the ball out as the Demon Deacons forced the game’s first turnaround. , effectively crushing any dreams of a heroic comeback in the last quarter.

As Wake Forest began to play more conservatively with the clock running out, the ‘Hoos contained the Deacons to another four-yard practice before a punt. But Virginia returned the ball to Wake as Brennan Armstrong threw her first interception of the night on a double-cover jump ball.

Nonetheless, Dave Clawson’s commitment to keeping the ball on the ground in order to keep the clock running killed any chance for the Demon Deacons to increase their lead. Wake made his third punt of the game inside the two-yard line after another three-and-out.

Although the end result was set in stone, Armstrong stayed in the game to keep pushing the ball down the field. The frustration among the Wahoo offense was evident as the players appeared battered and battered both mentally and physically. That said, there was no surrender from Virginia as Bronco Mendenhall called a timeout after an 11-yard run from Ronnie Walker Jr. to Wake’s 17-yard line with: 23 seconds left in the competition.

In a battle for pride, the ‘Hoos took three shots of the seven-yard line and – as a microcosm of the whole game – failed to score as Mike Hollins was called in to hold after qu ‘Armstrong’s two-meter run wasted time and set a course for a terrible night for the Wahoos.

Now sitting 2-2 on the season and 0-2 in the ACC game, this team are not what we thought they were after two weeks and will need to pull themselves together quickly as the competition continues to intensify in the weeks to come.