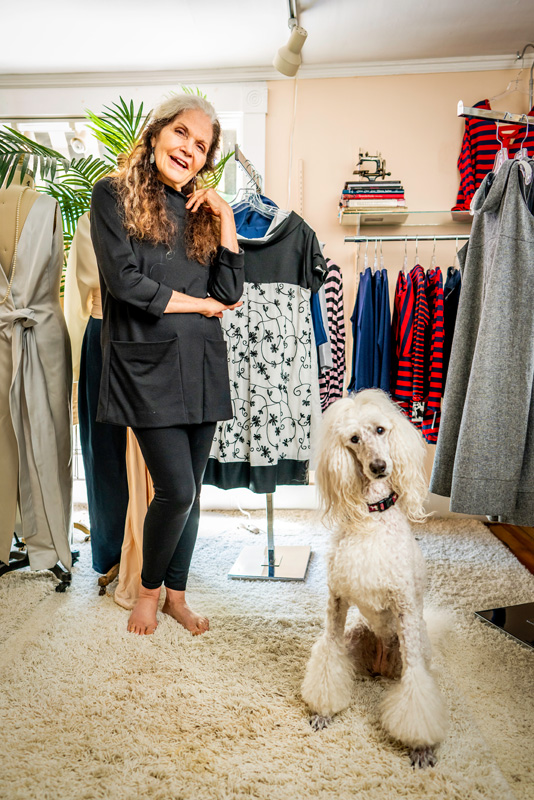 Until we meet again – The Martha’s Vineyard Times

One day in July in the summer of 1979, 41 years ago, I took a trip from Manhattan to Martha’s Vineyard. I was looking for a place where my creativity could flourish, my love of nature could be rewarded and my city spirit could be renewed.

Initially, the vineyard attracted me for two reasons: it was an island and I had lived on islands in Spain and Mexico. And her name – Martha’s Vineyard. The name to me evoked charm, serenity and a hint of mystery. Who was Martha, and how the hell did she get an entire island to be named after her?

To find out more about this fascinating place, I decided on a whim to take a trip. My husband at the time was on a business trip and I, after working day and night in my downtown loft to fulfill orders for my clothing line, I was exhausted and needed a pause. So I hopped on a train, then a bus, to an island that I didn’t know anything about (before Google) except that it had a fabulous name and for some reason it was calling me.

As this trip was literally last minute and I was prone to stealing it, I had nowhere to stay once I landed in Oak Bluffs. When I was traveling, I usually went to the farthest part of town, where it is less populated. I looked at the map, and this place was Gay Head. At the time, there was a house that people knew where the owner was renting rooms to strangers, and the owner of that house was supposed to be in Oak Bluffs that night. I met him and was able to travel up the island to his home. And that’s where I stayed on my first trip to the incredible island of Martha’s Vineyard – a tiny room in a house near the beach owned by a drinker (let’s call him flamboyant) who wrote articles for CBS. At New York. It was perfect!

It was three days later on this beach where I had my first real revelation in good faith. As I stood there in the late afternoon facing the ocean, a sense of knowledge came over me. I knew this island was where I would soon be living, and nothing in my life until then had been clearer or made more sense. That was 41 years ago, almost to the day.

And from this day to this day, there has been a lot of struggles, a lot of successes, and a lot of joy. But now it’s time for me to start a new chapter and a new adventure. Before we get to that, I want to sort out the details of my move from New York and tell you one of my favorite stories related to the work of Vineyard.

I returned to New York a week later and started breaking up my marriage, which I didn’t take lightly, and put my loft on the market. My clothing design business was taking off; I knew I could keep my accounts in New York City but base the business operations elsewhere, so the country girl in me could thrive as well. I realized on that first trip that Martha’s Vineyard had a unique combination – traditional urban sophistication coupled with great country serenity. And I chose Chilmark to be the island town where I was to settle down and open my first store.

At the time, a few people thought I was crazy to open a retail store like mine in Chilmark. I will never forget the question asked by another trader on the island with whom I befriended. He said, â€œLorraine, so what are you doing up there, the cyclists and the mopeds? I replied, “No, Larry, I take the Mercedes and the BMW.” Touch !

I quickly noticed that Chilmark was where my clients lived; they would be on vacation, and my store would be right on their way to the post office and the Chilmark grocery store. And I, who had been a little fish in a giant pond in New York, would now be a giant fish in a small pond on the vineyard. I also thought: my clothes, which would have a tag not only with my name on it but the name Martha’s Vineyard woven on it, would be a really nice keepsake for the ladies in town to take home. It seemed like an obvious thing to do, so I did.

I have many wonderful memories related to my business, but my favorite happened at a time in my life that I call â€œIt was the best of times, It was the worst of timesâ€.

It was my second winter on the island and I had almost used up my money selling my loft in New York. But as luck would have it, a few months ago – the first summer I opened my store – a chance encounter changed my business for years to come. Two women in the New York clothing industry had opened their first showroom and were visiting family members in Chilmark. They â€œdiscoveredâ€ my store, and a lot of excitement ensued, both from them and mine. I still had my own accounts, but it was a really big deal.

I sent a line of samples to their New York showroom, and orders started to pour in. By then, I had started a small cottage industry with a handful of local seamstresses. I can’t tell you how fun those days were. We were young, living our fantastic lives on this beautiful island and sewing together in a room with a view of the beautiful Atlantic Ocean. What more could we want? I’m about to tell you.

Although orders were plentiful, I had little money to pay the ladies. A friend loaned me money to buy the necessary fabric, but that was it. There were three of us at the time, sewing in my freezing cold house right by the beach on Moshup Trail. Back in those days, many of us were heating our homes with those disgusting, smoke-generating appliances called Kero-Sun heaters. We took turns writing bad checks at places selling kerosene and arguing over who wrote the last bad check when we needed more, but we knew every day we were getting heaps of money.

That day has come. My mailbox was at the top of the driveway on Moshup Trail Road and we were looking through binoculars to see if the flag was up which meant there was possible control in the box. Well, the first check came in, and my sewing friend Wendy and I decided to go to the Edgartown bank while Jane held the fort and continued sewing. I opened the car door; put the check on the dash and walked in – Wendy simultaneously opened her door and walked in. I looked at the dashboard and the check was gone! I then noticed about 30 feet away, fluttering in the wind, the check! It was wet and stuck to a branch of a bush. But to make matters worse, there were three foot snowdrifts between me and this bush. Well, I got the check, and the rest is history!

Throughout my time here there have been many embodiments of my business. From 1986 to 1989 I had a fabulous catalog business. We photographed them all on the vineyard, and the little beauties won awards and received tons of press. I was young and their success was overwhelming, but I dealt with it, and I also dealt with their failure, which was in part due to the crash of 87. During this catalog period and for some time longer, j I had stores in Aspen, Boston, Nantucket and here. And for many years, there have been literally hundreds of traveling shows along the east coast of Washington, DC, to Boston, and in between. Then in 2001 I started my clothing and home fabric design business and opened my home store in the cottage behind my clothing store. My fabrics got a lot of publicity, and I did a lot of show house work until the ’08 crash put a damper on it. How did I do it all? I have always said that running your own business takes imagination, dedication, persistence and mountains of courage. And that’s how I did it.

Now I am starting a new chapter in my life in San Miguel Allende, Mexico. A few months ago, I bought my dream house there, where I will devote my days to writing scripts and stories. I finished my first screenplay, â€œClara’s Secrets,â€ two years ago on a fashion designer in New York. And my boy, does she have any secrets! I also just finished writing the pilot for another of my stories called “Old Jake”. I have several other scenarios at different stages, and a “little” book that I’ll start writing once it’s installed. Writing is now my passion, an ability I didn’t know I had until five years ago, when I started writing essays for this paper.

Will I miss this island that has given me so much joy, happiness and to be honest, quite a bit of pain? Of course! I’ll miss seeing the winter harbor sunrises from the cemetery across the street where I secretly feed the wild turkeys; I will miss driving my antique Volvo with my two poodles in the summer; I will miss feeding the deer in the woods in the winter; I will miss the ocean, beaches, birds, Land Bank trails, and the sheer beauty of the vineyard. And of course I will miss you all, you who have supported my work over the years and taken the time to come to my shop during the holidays, if only to say hello. And above all, I will miss you dear ladies who have become so much more than clients; you have become precious friends whom I love and you know who you are.

Goodbye to you all, until we meet again.

dreamâ€¦.
By the parish of Lorraine

once I dreamed of dancing,
so a dancer I became.
and when my dreams turned to fashion,
I created elegant and lovely clothes.
now i dream of stories
intimate stories that I tell you.
tales of a lady, her secrets and her creature,
of two hermits, their bear, their crow and a doe.
I write ghosts sharing mysterious stories
of their forgotten lives and their long-ago misfortunes.
I write the adventures of a woman,
the artist angel of quick change
who helps those who live,
helping those who are gone.
and tomorrow? I dream,
tomorrow, I dream.

8 modern wall clocks to help you keep track of time

Supermarkets have a waste problem