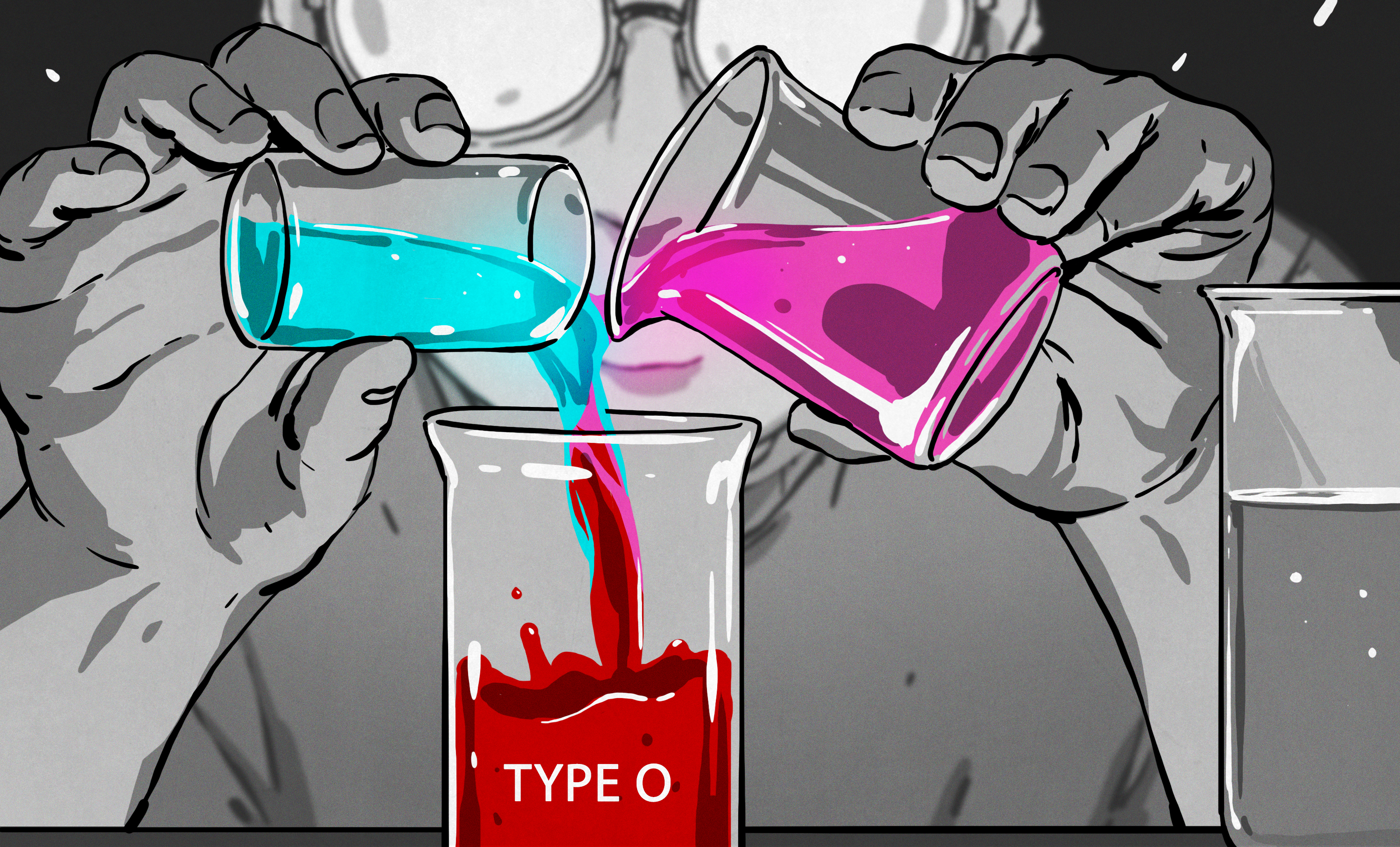 There were reports going on this week with somewhat breathless headlines that suggested a medical breakthrough was at hand: “In a first, two people receive transfusions of laboratory-grown blood cells.” A headline like that is sure to grab some attention, especially as the holidays approach and the inevitable calls for increased blood donations always seem to come at this time of year when the supply is pinched. Does a title like that mean someone is working on completely artificial blood?

As always with this sort of thing, the response is mixed. Yes, a team in the UK transfused two patients with a small amount of lab-grown red blood cells, and this is the first time this particular procedure has been performed. But while the title is technically correct, the amount transfused was very small, so the day when lab-grown whole blood transfusions will replace donated blood has yet to come. But the details of what was done and why it was attempted is the really interesting part here, and it’s worth delving into as it potentially paves the way for a future where fully synthetic blood could be a real thing .

To understand what is being done in this trial, which is called “Recovery and Survival of Red Blood Cells from Stem Cells”, or RESTORE, we need to consider in detail the process of blood formation. The transition from a single cell type to whole blood filled with a balance of red blood cells, white blood cells, platelets, and a myriad of other specialized cells and factors is called hematopoiesis. It’s an extremely complex and tightly regulated process, but it all starts with the simplest and, in some ways, most important cells in the body: stem cells, which are undifferentiated cells that can make a virtually unlimited number of copies of themselves.

The stem cell at the base of hematopoiesis is called hemocytoblast. In adults, hemocytoblasts are located mainly in the bone marrow, especially in the sternum, vertebral bodies, ribs and wings of the pelvic bones. In response to the presence or absence of certain growth factors, hemocytoblasts undergo a series of divisions that result in increasingly differentiated cells with specialized functions. While some hemocytoblasts eventually descend a branch that leads to the different types of cells that make up our immune system – leukocytes or white blood cells – others begin a process of differentiation into specialized cells for the transport of oxygen and carbon dioxide. carbon: red blood cells (RB), also called erythrocytes.

During the process of differentiation, or erythropoiesis, stem cells undergo a dramatic transformation in size and shape. Developing red blood cells become smaller and begin to take on their characteristic biconcave disc shape. Genes that code for heme proteins begin to express themselves, and developing erythrocytes begin to turn red as hemoglobin, an oxygen-carrying protein, accumulates in the cytoplasm. Eventually, the nucleus that was present in the stem cell, which has shrunk during the whole process of differentiation, is ejected from the immature erythrocyte, leaving a small sac of hemoglobin and not much more.

The immature red blood cells at this stage are called reticulocytes. At this point, they migrate from the marrow into the circulation, where they mature into erythrocytes within a few days. Reticulocytes make up about 1% of red blood cells in a healthy patient at any given time, with the remaining 99% being a mixed population of up to about four months of age. When they age, the red blood cells are too damaged to do their job, so they are removed from circulation and recycled by the spleen, with the elemental iron in their hemoglobin being recycled for the next cycle of erythropoiesis.

In a healthy adult, erythropoiesis is a prodigiously productive process; even though it takes three weeks to go from stem cell to reticulocyte, the marrow puts into circulation something like 200 billion new red blood cells every day. This ability to rapidly replenish our stock of red blood cells is key to blood donation; typically, blood donors fully recover from donating half a liter of whole blood in about 20 days. Because of this rapid recycling, blood donation has become an absolutely essential life tool, used to treat a wide range of diseases and disorders.

But, as life-saving as whole blood transfusions can be, there can be complications. Red blood cells carry protein factors on their surface – the familiar “ABO” groups – which can, even when carefully typed and crossed, eventually trigger an immune reaction in the recipient. It tends to be more common in frequent blood recipients, especially those with anemia like sickle cell anemia or thalassemia, or bleeding disorders like haemophilia.

One way to potentially circumvent the problem of developing what essentially amounts to a “blood allergy” is to increase the time between transfusions, and that’s exactly what the RESTORE trial is looking at. Rather than transfusing whole blood containing red blood cells with a wide range of ages, they want to be able to transfuse patients with blood where every red blood cell is exactly the same age and brand new. This way, at least hypothetically, the transfused red blood cells would survive for their entire 120-day lifespan, rather than being removed continuously from the time of transfusion.

The first step in exploring the usefulness of laboratory-grown blood in treating disease is to make blood. Although there has not yet been a published article on the RESTORE trial, in vitro erythropoiesis has been a fairly standard lab procedure for decades. The methods vary, but from the description given by the RESTORE team, it is likely that they isolate and amplify the small number of hematopoietic stem cells that circulate in the blood with the mature cells. These cells have antibodies on their surface that mature red blood cells lack, and this fact can be used to isolate them from the rest of the cells. A small population of stem cells can then be cultured in the appropriate growth medium.

To transform the stem cells into red blood cells, the culture can be treated with erythropoietin, a protein normally secreted by the kidneys. Erythropoietin, or EPO, is secreted when the body detects a lack of oxygen in the blood; the body responds by stimulating the differentiation of stem cells into red blood cells, to increase the oxygen-carrying capacity of the blood. EPO rose to fame in the 1990s as a performance-enhancing drug when used by athletes, especially cyclists, to increase the oxygen-carrying capacity of their blood.

For the RESTORE study, whole blood is obtained from healthy donors, stem cells are purified from whole blood, and red blood cells are cultured. A portion of the whole blood is also set aside as a control. The two batches of blood are then labeled with a lightly radioactive tracer. On the donor side, healthy volunteers receive a very small transfusion – just a few milliliters – of the cultured blood. They will be followed up over the next four months, with samples of their blood analyzed to see how many cultured red blood cells remain. Once all the cultured blood has been removed, the experiment is repeated with the donated blood.

If all goes well, the RESTORE team will transfuse a total of ten volunteers. They expect cultured red blood cells to last longer in circulation than whole blood transfusion; if so, it could open the door to improved therapies for patients requiring frequent blood transfusions. There’s a long way to go before that, of course, not the least of which is scaling up a method that can currently produce enough cultured red blood cells for one person.

The future of synthetic blood

But could a similar process one day result in fully lab-grown whole blood? It’s possible, but whole blood is much more complex than simple red blood cells, and learning how to grow large amounts of it will likely be more difficult. What would make this possible is the initial stem cell: the hemocytoblast. Since every cell in whole blood is descended from this cell type, it should be possible to grow whole blood completely in vitro. That doesn’t mean the process would be entirely synthetic, of course. These stem cells have to come from somewhere, and the most obvious source would be human donors. This raises the question of why you care about the in vitro steps; if you have to donate, just take whole blood and be done with it, right?

While this is true, there would be significant benefits to turning donated stem cells into artificial whole blood. The main advantage is that since stem cells are essentially immortal, a single donation could potentially generate an unlimited amount of whole blood. This could be very beneficial wherever the pool of potential blood donors is limited, but there may still be a demand for blood in an emergency – think space travel. And even if generating whole blood from a stem cell culture never turns out to be possible, being able to increase erythrocyte production and mix it with donated plasma could be extremely valuable – thanks to plasmapheresisplasma can be donated much more often than whole blood.

The day when human whole blood donations will no longer be needed will probably never come, and if it does, it is still a long way off. But the fact that the RESTORE trial managed to produce even the few milliliters of blood needed to do their first experiments is exciting news. Not only could this trial lead to tangible benefits for patients who need it right now, but it could also open the door to unlimited whole blood on demand.