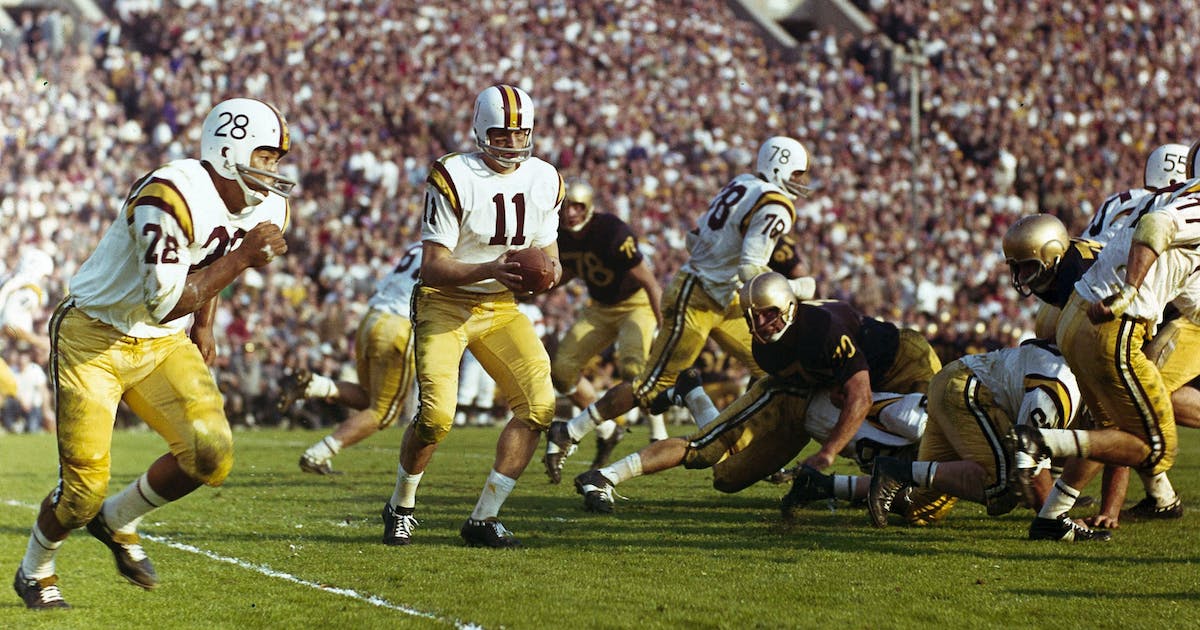 Reusse: The Big Ten I grew up with is dead and buried

Disagreements with my poignant thoughts offered either for the Star Tribune or the goofy medium that is Twitter often lead to this dismissive retort:

Officially, I am not considered a baby boomer, having been born in October 1945 – three months before the 1946 to 1964 guideline for this post-war generation.

I looked and discovered that I am classified in the last vestige of the “Silent Generation”, those born from 1928 to 1945.

There were 21.78 million “silents” in the United States at the start of this decade, and that number hasn’t held steady, as best I can tell.

Thursday’s astonishing events, beginning with an early morning tweet from Bay Area reporter Jon Wilner that UCLA and Southern California were heading to the Big Ten, and ending in the evening with a unanimous welcome from the Big Ten presidents…

Well, that got me thinking about the world (especially sports) that we late silent and early baby boomers grew up in.

And you know what problem we didn’t face? The need for immediate gratification.

When you’re 9 and TV comes to town as a station (KELO from Sioux Falls) on the small screen of a black and white Philco, you either watch this or go out and throw a ball against the steps .

When it’s one of nine consecutive Saturdays in Minnesota, starting the third week of September, you listen intently to Gophers football on the radio.

And no matter how the season goes, it’s important that afternoon that the Gophers beat not just Wisconsin or Iowa, but Purdue, Illinois, Northwestern. Any victory would be all the necessary gratification for the next week.

I was back home consuming the Gophers on the radio, which didn’t lessen the excitement.

We had the chance to watch this wonderful contest on our station.

We didn’t need any more gratification than the Rose Bowl. For quiet people and baby boomers, Pasadena over the New Years holidays was the ultimate.

The Gophers, already voted national champions by the AP and UPI, finally made it after the 1960 season. We were upset by Washington 17-7, and we always remember this:

Bob Schloredt, the Huskies’ irrepressible quarterback, was blind in his left eye due to a firecracker accident when he was young.

Satisfaction came a year later, when the Ohio State faculty board voted not to allow the Buckeyes to participate in the Rose Bowl.

The offer fell to the Gophers, second. All-America quarterback Sandy Stephens and the offense played their game this time, and our heroes choked UCLA 21-3.

Take a moment to imagine what we, the last of the Silent Ones, are invited to fathom this weekend:

We remember the Gophers getting a second chance at the Rose Bowl because Columbus faculty powers didn’t like the idea that Woody Hayes was giving Ohio State a reputation as a football factory instead. than a large institute of higher education.

And on Thursday night, the Ohio State President was among those shouting, “Send us your Trojans, send us your Bruins and, yes, Fox Television, send us your billion plus a year.” in Big Ten dollars…for no more reason than our The brilliance of Buckeyes football and the possibility of flooding it into the LA market.”

After Sandy and Co. won our Rose, I had the good fortune a quarter century later to cover a number of Rose Bowls. I loved the scene, I loved the match between us (Big Ten) and them (Pac-10).

The sun hits these mountains, the Big Ten team arrives and 40-50% of this great football valley explodes, then here come the men of Troy – Traveler, the white charger; “Fight On”; dozens of dull red and yellow plains screaming “speed”; the expectation that, no matter the odds, visitors to this stadium were ready for a long late afternoon battle in footballing heaven.

These Rose Bowls were awesome.

You’re sure to enjoy what ESPN vs. Fox brings next, college football fans. I had my fun. Might as well keep silent about it.

How to save on groceries this summer