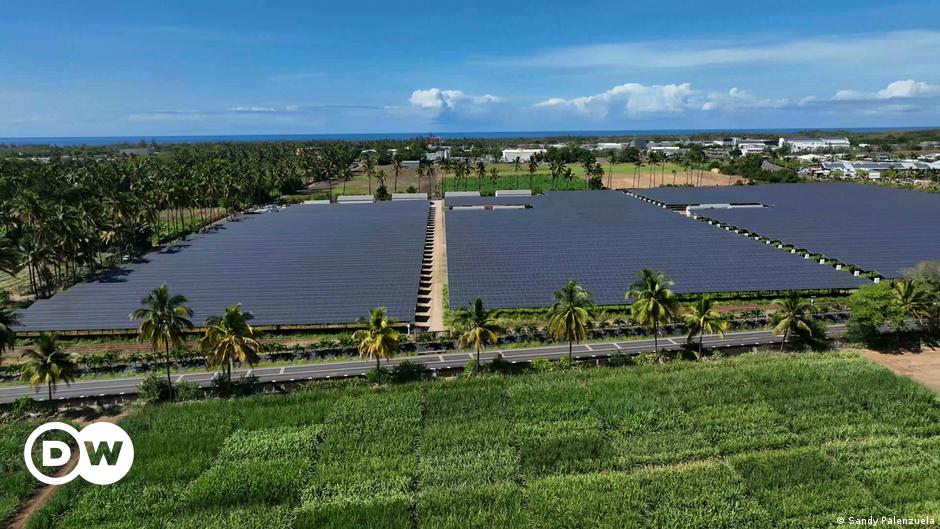 At first glance, Reunion Island looks like a paradise – with its palm trees, lush green landscapes and a cool sea breeze. But the French overseas territory in the Indian Ocean is less pristine than it appears. Almost two-thirds of its electricity is produced from fossil energy sources.

Local government now aims to switch to 100% renewable energy production by the end of 2028 – some media had falsely announced a target date of 2023. Metropolitan France is only targeting a renewable share of 32% in 2030.

But not everyone agrees with the Reunionese method to achieve this goal.

The island’s electricity currently comes mainly from the heavy oil plant of the French utility EDF in the town of Le Port, in the north-west of the island, and from two power plants, owned by Albioma, operating in coal about six months a year.

The EDF plant will operate in the future with rapeseed and soybean oil, the Albioma plants exclusively using biomass.

One of these, called Bois-Rouge, is located about 10 kilometers (6.2 miles) east of the capital Saint-Denis in the north of the island. Next door is a sugar cane factory, run by the international group Tereos and also called Bois-Rouge.

On a recent Friday morning, the manager of the sugar cane factory, Vianney Tailamee, led a group of visitors through the site as rumbling trucks unloaded huge loads of cane.

“Our production is already sustainable and works like a perfect cycle,” he told the group which included Nelly Noel, responsible for environmental issues and industrial risks at Albioma.

“This is where we squeeze the juice from the cane sugar,” he explained, pointing to a huge network of machines behind him.

â€œResidues such as sand and earth are scattered over the fields of adjacent farmers. Molasses, the sugar syrup, is used to feed the animals or to go to the nearby distillery, which produces bioethanol or alcohol with it. And the bagasse, the crushed canes, go to the Albioma factory, “he said as Noel nodded.

â€œIn return, we get our electricity from the grid, into which Albioma feeds its produced energy,â€ he added.

Most of the biomass will be imported

â€œThis electricity will soon be produced 100% with biomass and not just 40%,â€ NoÃ«l explained a little later to DW while guiding the team through the company’s site in Bois-Rouge. Each of Albioma’s two factories on the island has a total capacity of around 110 megawatts.

Biomass is considered climate neutral because it absorbs the same amount of CO2 when growing as it emits when burning.

Next to Christmas, construction work was underway for two huge hemispherical reservoirs, where the wood pellets that will replace the charcoal will be stored. The company invests around 200 million euros ($ 226 million) per site.

“We will be importing most of the wood pellets from the northern United States, later potentially from Mozambique and South Africa,” she explained.

But this is precisely what displeases activists like Jean-Claude Futhazar, secretary general of the local environmental association Srepen.

“We should source all of our biomass locally; importing it only causes additional CO2 pollution. And we will depend on other countries for energy,” he told DW.

“In addition, buying all the wood pellets in Reunion would create local jobs,” he said.

The government of Reunion is indeed aiming to become energy independent but only by the end of 2030. It is too late, says Futhazar.

The qualified engineer believes the government’s plans are also insufficient in other areas such as transport.

“Almost all of our transport is based on fossil fuels and the number of inhabitants and cars continues to increase,” he explained.

Futhazar believes the government should build an island-wide rail network to reduce exhaust pollution, but he knows it could take decades.

Could electric cars be the solution?

Futhazar’s electric car is only part of its sustainable lifestyle. Everything in his house, built 200 meters above sea level in the mountains a few years ago, is planned for this.

It produces its electricity through photovoltaic (PV) panels on the roof. Huge doors create ventilation and replace air conditioning, reducing his energy consumption – from 9,000 kWh in his former home on the coast previously to 3,200 kWh per year. Futhazar even now sells electricity back to the grid.

Solar power is part of the plan

His garden produces most of the fruits and vegetables that he eats. A dozen giant tortoises in an enclosure eat his food scraps.

â€œI wanted to build a sustainable house – after all, we have to leave the Earth to our children in an acceptable state,â€ Futhazar said.

He believes the government should encourage more people to take the same path, at least when it comes to power generation.

â€œAt least 60% of houses in Reunion are isolated houses. If all were equipped with photovoltaic panels, this could cover half of our island’s electricity needs, â€he said.

The government has indeed included solar energy in its transition plan, but in the form of large projects.

Akuo Energy, based in Paris, is already contributing to the solar plan. The energy producer has carried out 11 photovoltaic projects on the island with a total capacity of 34 MW, at least an additional 30 MW are in preparation.

One of those already built is the 9 MW Les Cedres project in the south of the island.

“Our park combines photovoltaic panels and organic farming. In addition, a battery system stores electricity during the day to inject it into the grid at night during peak hours”, said Xavier Ducret, CEO of Akuo Energy for the Indian Ocean, to DW. walking along the lines of solar panels on a recent Thursday morning.

A team of farmers attended to the different types of fruit and vegetables from the site growing under the panels.

“I think we will have to rely on such combined uses of the land – our island does not have a lot of space, as huge areas are UNESCO World Heritage sites and under protection and agriculture has also need space, â€said Ducret.