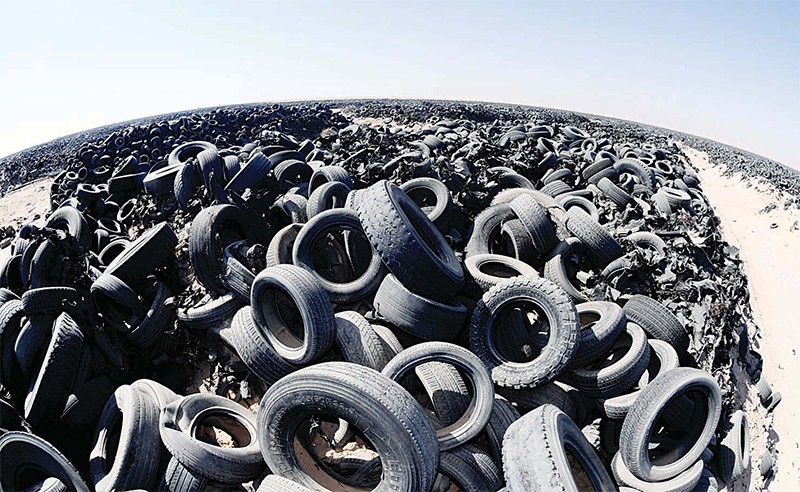 KUWAIT CITY, October 2: It looks like the estimated 40 million used tires that have been moved from the Erhiya region in southern Saad Al-Abdullah to the Salmi region will remain on the streets of Kuwait, but innovative way, because the tire recycling plant is working on them and extracting environmentally friendly products, which will be added to the asphalt mixture that will be spread on the surface of the streets of Kuwait, reports the daily Al-Rai . While visiting the recycling plant located 67 kilos on Salmi Road, the daily met the CEO of the plant, affiliated with Abisco International General Trading Company, Eng. Alaa Hassan. She explained that the tire recycling project started in 2016 and its production started in 2019.

The factory was established on land allocated to it by the Public Authority for Industry with a production capacity to extract materials from three million tires per year. The work of the factory is based on recycling the tires with the aim of transforming them into various products that meet the daily needs of the Kuwaiti market. It is built on an area of â€‹â€‹20,000 square meters at a cost of KD 4 million and does not impose any financial burden on the State. The main objective behind the establishment of the factory is to clean Kuwait’s land of used tires, which have exceeded 40 million after being accumulated over the years in the landfill.

This had caused great visual and environmental pollution, and required the elimination of this phenomenon by recycling these tires and using them with other products. It is environmentally friendly and has several uses. In addition, the transport of these tires took about six months, which can be considered a great achievement, considering the quantity of tires. Ing. Hassan pointed out that the Public Environment Authority (EPA) played a major role in the implementation of this project, without costing the state a dime, as it relied on the private sector to transport tires and remove environmental and residential barriers that have caused headaches for the government due to the large quantity of used tires and the lack of proposed solutions to deal with it. She also praised the Public Authority for Industry, which granted the factory the appropriate land it needed as a kind of government support to the private sector to participate in safeguarding the Kuwaiti environment. by reusing used tires. Ing. Hassan said these tires are assembled, cut and recycled to make high-efficiency and quality Kuwaiti products that are in high demand in neighboring countries such as Qatar and Saudi Arabia, as well as other Asian countries such as India, under long-term contracts. . In addition, the factory is able to meet the daily needs of the Kuwaiti market of all sectors of education, industry and services. With regard to Kuwaiti products, Eng. Alaa Hassan said: â€œThe factory produces rubber granules of various sizes, including what is added to the asphalt mix for paving the roads. These are supposed to be safer and of better quality for paving roads, because it is the most economical and the cheapest in terms of cost and its high efficiency on the roads â€.

She said the factory manufactures flooring for gymnasiums, children’s playgrounds, sports clubs and walkways, adding that it also produces different types and sizes of flower beds that can be used in outdoor areas. houses, farms and the like. In the same context, Ing. Hassan urged the Ministry of Electricity and Water to provide electricity to the plant, after the plant has been built and the required fees have been paid. She expressed the hope to speed up the delivery of electricity to complete the required work and stabilize the operating condition of the plant. Eng, Hassan said, â€œThe factory depends on diesel to run and pays thousands of dinars per month to run machinery, air conditioning, lighting, housing for workers and others, especially after the removal of the diesel subsidy for some factories. The Ministry of Finance has promised us to restore support, given the situation of the plant and its location in the Salmi region â€. She appealed to the Department of Public Works to build a road between the factory and the highway, revealing that â€œThe current road is unpaved and is full of dirt. There is no lighting or signs indicating directions. This gives the factory and the country an uncivilized image for foreign visitors. In addition, there are mines and cluster bombs that have been buried since the brutal invasion. They appear more during the winter season, which causes terror and fear among the employees and owners of the trucks who come to the plant â€.

It’s time to get down to business, candy season is upon us