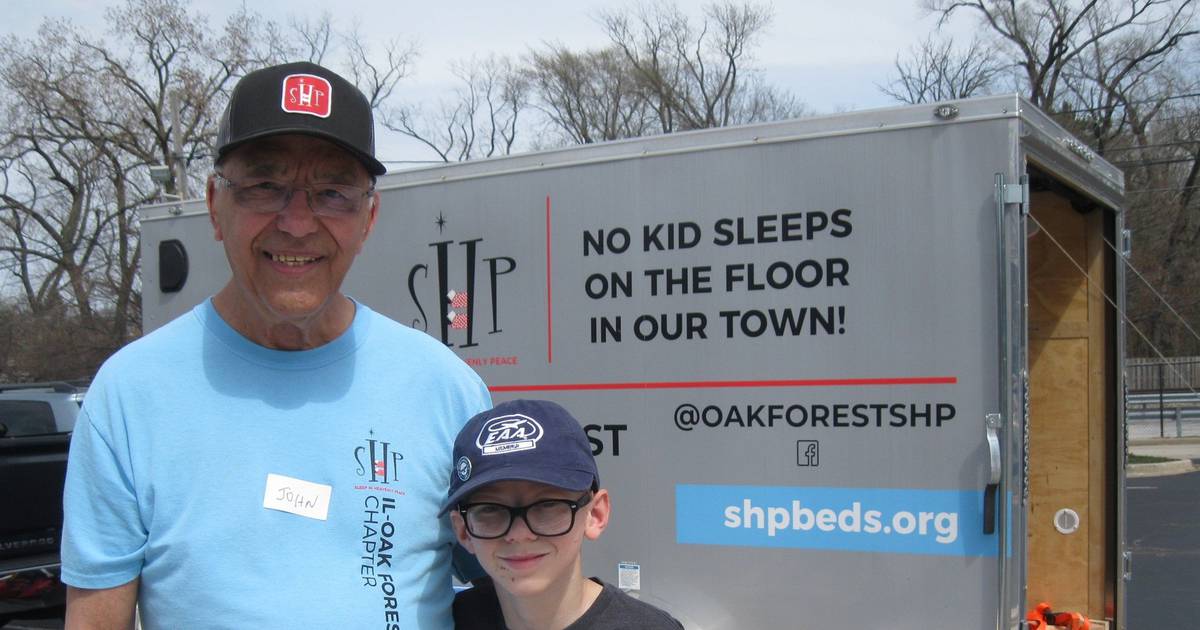 Many dogs in America have their own beds, while many children do not. This sad irony motivated Dave King, owner of 4 Paws Playhouse in Oak Forest, to become president of a national non-profit chapter that asks volunteers to build bed frames and deliver them with mattresses and bedding for children in need.

With 242 chapters across the country, Sleep in Heavenly Peace has built and delivered over 61,000 cribs in the United States and other countries since 2012.

“You don’t realize how widespread the need is. I’ve delivered beds within a mile of my own house,” said King, who lives in Oak Forest and started the Oak Forest chapter in 2018.

Since then, the chapter has produced 350 children’s beds in the southern suburbs of Chicago.

“All the work is done by volunteers,” King said. “No one is paid and no experience is necessary. No special tools are required. We provide everything. If I can do it, anyone can do it.

King and a core group of about 15 volunteers have organized and overseen bed-building events at churches, schools and community facilities, with support from the Rotary Club and Lowe’s Home Improvement, which donates lumber and other materials. The organizations organizing the events donate money for mattresses and bedding.

Fire and police departments, nurses, teachers, social workers, other community service providers, clients and friends helped King locate children in need. And there seem to be a lot of them.

In 2019, 38% of American households with children faced housing problems. These issues included physically inadequate housing, overcrowded housing, or housing costs exceeding 30% of household income, according to the US Census Bureau and the Department of Housing & Urban Development.

These housing factors contribute to children not having a bed of their own and may have worsened during the pandemic.

Fortunately, King has made it a point to constantly involve new volunteers and organizations to help meet the demand for beds.

The chapter’s Facebook page allows people to request beds or sign up as volunteers to participate in regular bed-building events in the southern suburbs. Churches and schools are among the most frequent venues for events, attracting enthusiastic volunteers. King affectionately calls the growing group “an army of layered heads.”

Andy Neu, a former chaplain and director of campus ministry at Marist High School, is a deacon and associate director of mission and ministry at St. Barnabas Catholic Parish in Beverly.

“When I was at Marist, I brought the organization over and had a bunk bed built there,” Neu said. “We did the work, and it was very successful. It was very good to do that.

Neu wanted to bring that same experience of helping others to the members of St. Barnabas Parish. He also recently inspired them to raise $3,500 to buy mattresses and bedding for the Oak Forest group. Recently, Neu and about 50 volunteers spent three hours making bed frames in the church parking lot.

About thirty volunteers are from the parish. The others were seasoned regulars who had started volunteering with King at other events.

The parking lot looked like a factory production line with several stations. With warm, sunny weather on their side, the volunteers sawed boards at the first station. At another station, volunteers sanded down the pieces of wood to prevent children from getting splinters in their hands.

“We’re a little dusty,” said Cathy O’Loughlin, a ward member of 42 years. “But I’m not complaining. I love the goal. We helped build something to benefit children in need.

Lindsey Paula, another church member, spent the afternoon with O’Loughlin sanding the bed pieces. “I heard about it in the church bulletin and saw it as an opportunity to give back,” she says.

Children under 12 could not participate because the effort involved the use of power tools, saws and drills, but Paula’s son, Halas Paula, is 14 and will be graduating this spring from the St. Barnabas School. He also sanded the parts of the bed and stained the headboards. “It’s fun to do this stuff,” he said. “I like to help.”

Kwiat said her father, Jason Kwiat, discovered the volunteer effort when he took the family dog ​​to 4 Paws Playhouse. Sometimes all three generations volunteer together.

News from the southern suburbs delivered every Monday and Wednesday

Young Kwiat, a seventh grader at Central Middle School, approached his teachers to plan a June bed-building event at the school. “It feels good to be able to help others who are not in the best situation,” he said.

Other volunteers stoked a fire to heat branding irons bearing the acronym Sleep in Heavenly Peace, SHP. The hammering of the irons into the headboards gave off plumes of smoke carried away by the warm breeze.

Like several other volunteers, Marty Wirtz also seemed to feel good helping out. He worked at the last station, soaking the headboards in a large square plastic tub filled with a homemade, non-toxic stain made from vinegar and steel wool.

“I think of kids putting their heads on the ground and that’s not good,” he said. “They need a bed.” His wife, Maudie Wirtz, who also volunteered at the event, nodded in agreement.

Susan DeGrane is a freelance writer for the Daily Southtown.