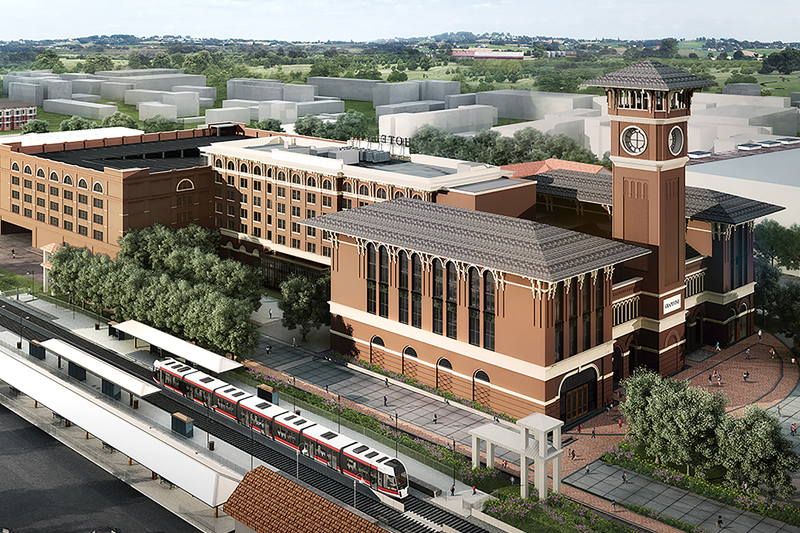 Each year, the Federal Transit Administration distributes more than $ 2 billion to help build new rapid transit systems by rail, streetcar and bus through its capital grant program. Much of this money is distributed through the “New Beginnings” program, which provides grants for projects that cost more than $ 300 million in total or that seek at least $ 100 million in federal funds. In order to justify so much investment, cities and regional transit authorities must demonstrate that the project will improve mobility, reduce congestion and produce environmental and economic development benefits. A new bill from Rep. Scott Peters, a Democrat from San Diego, would add housing to the list.

The Build More Housing Near Transit Act was introduced by Peters this month. It would change New Starts’ funding rules by requiring applicants to create “housing feasibility studies” showing housing production opportunities in the area around the project, and by encouraging cities seeking funding to adopt land use plans that accommodate more housing. Peters has been working with various advocacy groups on the legislation since the spring, according to this office.

“The purpose of this bill is to use the leverage of federal funds to get cities to make affordable housing near transit projects a priority,” Peters said in a mailed response. electronic questions. “This is the right thing to do to meet our housing needs and to reduce air pollution from cars. ”

The conclusions section of the bill refers to a national housing shortage, the “under-production” of the 7.3 million housing units needed since 2000 and the heavy burden of housing costs for people living in the city. poverty. Low-income families are often forced to endure long commutes to work, but those who live near public transportation have lower costs, according to the bill. He also notes that public transit ridership is higher when there is more housing near public transit stations. New homes built near train stations “should target middle-income families, especially those with a region’s median income of 60 to 100 percent,” he said.

“As we outlined in the conclusions section of the bill, we wanted to stress the importance of building housing for low- and middle-income families, who benefit most from areas served by public transport. Said Peters. “This number is not normative; We know that transit agencies aren’t the ones that approve particular developments, but we’ve included the number to signal cities and local jurisdictions that we need to focus on building affordable housing.

In addition to Peters, the bill is co-sponsored by Democratic Representatives Denny Heck of Washington, Donald Payne of New Jersey and Katie Hill of California. He also has two Republican co-sponsors: Cathy McMorris Rogers of Washington and Mike Gallagher of Wisconsin. The legislation has also been approved by various independent groups, including the American Planning Association, Enterprise Community Partners, Habitat for Humanity, the National Multifamily Housing Council, and the Regional Plan Association.

Legislation is also a priority for Up for Growth, a DC-based nonprofit that lobbies for policies that increase the production of affordable and market-priced housing. The group is member-based, with a range of housing advocacy and “social justice” groups paying membership fees, but most of its funding currently comes from large real estate business organizations and individual developers and owners, according to the group. Mike Kingsella, the group’s general manager. The Build More Housing Near Transit Act is one of the few bills the group is currently proposing that seek to advance a pro-growth agenda, Kingsella said.

“We are particularly focused on removing barriers of all kinds to housing for all,” says Kingsella.

According to Kingsella, the way the FTA funds projects through the New Starts program has not created dense housing projects near public transit stations, where they can provide residents with better commutes and reduce mileage. traveled by vehicles. One of the problems is that the FTA looks at each factor in isolation, Kingsella says. A project can score high if it appears to show potential for economic development, even if the potential is only based on land use regulations and not on a real market for development. Adding a housing feasibility study into the mix would allow officials to judge the likelihood of a project supporting housing production based on a range of factors, Kingsella says. And that would give city planners and transit planners a better opportunity to coordinate.

While California state lawmakers have tried and failed for several years to pass bills that would increase the area close to public transportation, Kingsella believes the federal approach to the problem is more fortunate. Federal legislation is based more on incentives than previous efforts in California that sought to force cities to zone dense housing near transit nodes.

“The beauty is that we are trying to develop the federal evaluation criteria for these projects so that FTA is able to reward and incentivize [more housing production] in these transit zones, but not to prescribe the approach, ”says Kingsella.

Peters’ office has acknowledged that the bill is not likely to pass as a stand-alone law, but could be incorporated into a larger transit bill next year. Kingsella says bipartisan support for the bill shows there are ways for the federal government to support better housing development.

“Nothing in Washington, DC and Congress is easy, but what I believe is that there is a political window open right now,” Kingsella says. “There is a bipartisan interest in the discourse on removing barriers to housing. ”

Jared Brey is the Housing Correspondent for Next City, based in Philadelphia. He is a former editor of Philadelphia Magazine and PlanPhilly, and his work has appeared in Columbia Journalism Review, Landscape Architecture Magazine, US News & World Report, Philadelphia Weekly, and other publications.

Follow Jared . (JavaScript must be enabled to display this email address)