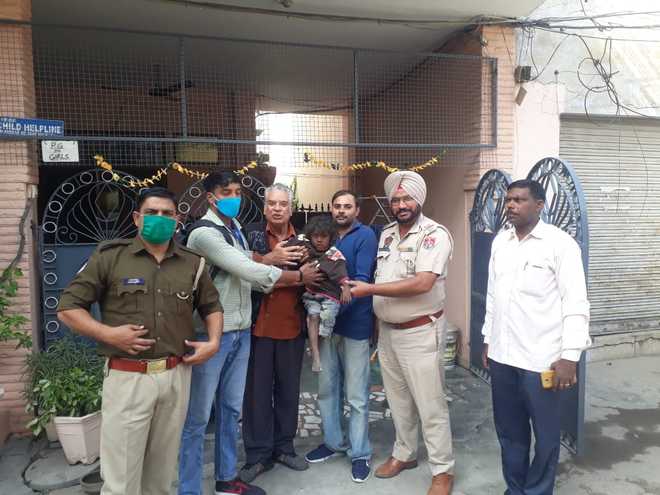 A factory worker in Jalandhar has spent his entire evening of Diwali looking after and finding a home for an abandoned two-year-old, ignoring his plans to return to his hometown of Behraich in Uttar Pradesh for the celebrations festive.

Do din se, jise bhi bola, sabhi gaali hi diye. Shabashi ko nahi diya. Sab kahe tum pagal ho, tumhara dimaag kharab hai, ise kahan se utha laye. Ye to bhikhari lagta hai. By humne kaha atma to bhagwaan hi diya hai. Baccha hai. (Everyone mistreated me. He said I had gone mad, I was mad. Why did I pick him up? He looks like a beggar. But I said he’s still a creation of God.) Shailesh, a factory worker

Shailesh Kumar (40), a factory worker in Ladowali Road, who was due to reach his home in Diwali, instead returned from Bareilly to find a home for the two-year-old, whom he had found on a road. very busy in Jalandhar. Shailesh cleaned up his poop, fed him, and spent his Diwali night in a Jalandhar thana with the kid and two other cops so the boy could find a home. Shailesh has three children (two daughters aged 12 and 9 and a son aged 2) in Behraich, but now he proudly tells everyone that he has four. He was listed as the little boy’s guardian in Nari Niketan, Jalandhar.

En route to board a train for Lucknow to spend Diwali with his family, at Jalandhar Cantt station on the evening of November 3, Shailesh rescued the ragged boy from being nearly hit by a vehicle near Lamma Pind. With the boy unable to speak from his house, Shailesh took him to Cantt station where he approached the local police. Driven out, Shailesh took the kid on the train.

In Bareilly, Shailesh got off and took the child to the local GRP thana, seeking shelter for him. But from there, two cops escorted him back to find the child’s house in Jalandhar. Back in town, they approached the thana Rama Mandi where Shailesh spent the night of Diwali in a room with the child and two cops from Bareilly. It was on the morning of November 5 that the boy was handed over to the Nari Niketan, Jalandhar, with the help of a Good Samaritan Surinder Saini.

He shared, â€œI got tired of telling the story. I gave explanations to everyone. The cops looked at the child with great apathy when they saw his soiled pants. I washed it. When I arrived in Jalandhar at 6 p.m. on Diwali night, the police station was lit by diyas. The cops gave me candy and were surprised at my story. We slept in thana. I lied to my wife and kids saying that I lost my bag and so I was stuck. But I couldn’t abandon the child. The police from the station were very supportive. They trusted me and went to look for the parents but couldn’t find anyone. Eventually the boy landed in Nari Niketan. I will meet him again.

Putting it back on, the boy cried uncontrollably and didn’t leave Shailesh, which even brought up the cops’ feelings. Shailesh canceled his Diwali holiday and distributed the crackers and candies he bought for his children to his neighborhood children.

Activist Surinder Saini said, â€œI was informed of the child after Diwali Day. Shailesh did a commendable job. He washed, fed and provided clothes for the boy as people care for their own children.

Handing it over, the boy cried uncontrollably and did not leave Shailesh, which aroused the cops’ feelings. Shailesh canceled his Diwali holiday and distributed the crackers and candy he bought for his children to his neighborhood children