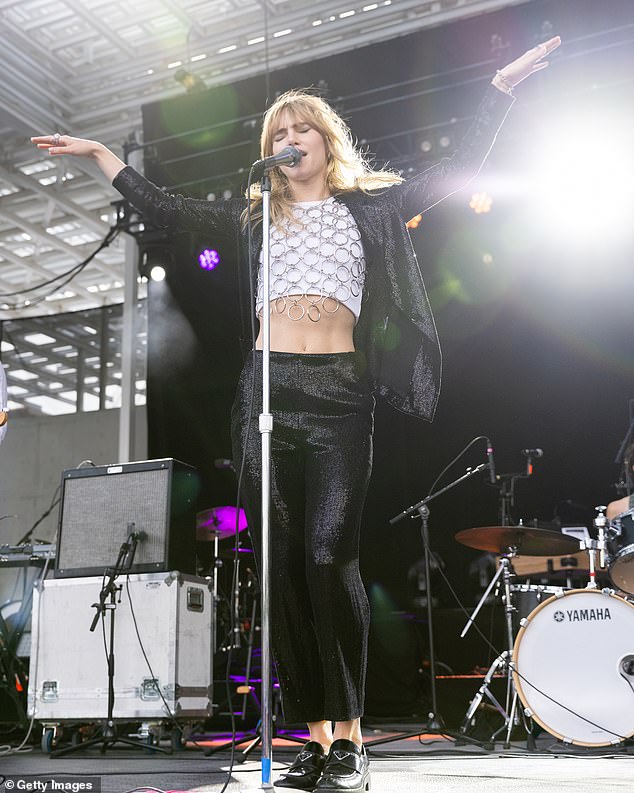 By Emily Prescott for the Sunday Mail

Model Suki Waterhouse seems to be living her dream. First there is movie star boyfriend Robert Pattinson. Add to that her fashion label and thriving film career (she stars in Daliland, which will be released later this year) and things seem to be looking up.

Now Suki is embarking on a new realm. Her debut album I Can’t Let Go was released in May and she is now on tour, including this concert in Austin, Texas on Friday.

She has already gained famous fans. Georgia May Jagger, daughter of rocker Mick, sings her praises on Instagram, and Suki is signed to cult US label Sub Pop, which backed indie legends Nirvana in the 1990s.

fashion brand is also booming while a Hollywood film will also be released this year” class=”blkBorder img-share” style=”max-width:100%” />

Dressed in chainmail and a shimmering two-piece, Suki – most famous for her catwalk appearances, below – strutted along the stage in a pair of £850 Prada loafers.

Despite his smile, his words are a little melancholy. “Humans fuck more than anyone else and we shouldn’t be afraid to want less,” she croons.

Does Suki’s embarrassment of wealth become too much for her?

The former prep school which counted Boris Johnson and actor Damian Lewis among its alumni could be turned into a housing complex if the new owner gets his way.

Developer Nick Lebetkin expects a tussle with East Sussex council over the historic building, but says he has a plan to preserve the memory of Ashdown House’s most famous pupil. “We will call development the Boris Johnson domain,” he laughs.

The Marquess of Bristol’s search for an heir is finally over. I can reveal that Frederick Hervey and his wife Meredith have just welcomed a newborn son.

Infant Frederick William becomes Earl of Jermyn until he inherits his father’s title.

The arrival will ease tensions within the family, whose noble lineage dates back to the 17th century.

They faced a crisis when it was discovered that, with no male heirs, the Marquess’ title and lands would ultimately be inherited by a distant relative, an accountant from Eastbourne called Tim.