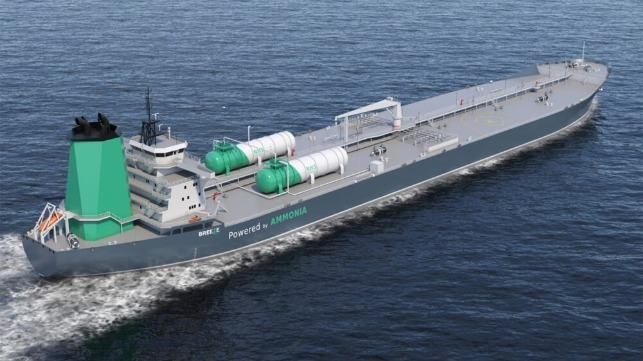 Designs for the ammonia-fueled Aframax tanker


Norway’s Green Shipping Program is undertaking a project designed to expand current efforts in the shipping industry on ammonia engine research and safety and class rules to develop an ammonia-fueled ocean-going tanker . The public-private initiative supported by the Norwegian government wants to build on the experience of the short sea shipping segment with alternative fuels to start an ammonia pilot for global shipping.

Equinor owns the pilot and will lead the work involving partners such as DNV, Yara, Grieg and Altera Infrastructure. Færder Tankers contributes to the pilot project.

The ship’s designs will be developed by Norwegian company Breeze Ship Design. They will be responsible for the integration of the ammonia fuel and bunker systems, as well as the machinery and the propulsion system, into the ship.

The objective is to develop an Aframax tanker of 110,000 dwt which will be powered by ammonia. Among the main objectives of the pilot project is the study of the technical and economic applicability of ammonia engines, fuel and refueling systems using the generic tanker design developed by Breeze. They will seek to understand operational safety aspects and skill requirements as well as address safety issues in design. They expect to identify barriers to the adoption of ammonia as a marine fuel while also completing the design of an ammonia-powered tanker that can be chartered and operated by Equinor as a demonstration of the technology.

In a separate project in Norway, Grieg Edge and Wärtsilä are also collaborating to develop a revolutionary new tanker, the MS Green Ammonia. The vessel, which will carry and run on green ammonia, is expected to be operational as early as 2024. the partners’ plan is for M/S Green Ammonia to distribute its cargo from a factory in Berlevåg in the far north of Norway to various sites and end users along the Norwegian coast, including a power station in Svalbard in the Arctic Ocean. They plan to target current LNG users as early ammonia users.

Last week, Japan’s NYK, MTI Co. and Finland’s Elomatic announced that they had completed development of a concept for an ammonia-ready LNG-fueled vessel that can be converted from LNG to an LNG-fueled vessel. ammonia. During the first phase of the project, they developed designs for a post-Panamax car carrier and bulk carrier seeking to develop the concept and determine issues that are not yet technically feasible. They looked at the material needed for the tank, the placement of additional tanks for ammonia, which has a larger volume than LNG, the strength and stability of the hull structure through the addition of tanks and ‘a device for supplying ammonia to the main engine. Currently they are working on the design of a Capesize bulk carrier and a very large crude oil carrier, which they plan to complete by mid-year and by the end of 2022 proceed with the actual design of an ammonia-ready vessel with a shipyard and marine product manufacturers incorporating the concept design, including the optimal fuel tank layout, ammonia supply device and structural strength of the shell.

The most common consumer frauds and how to avoid them