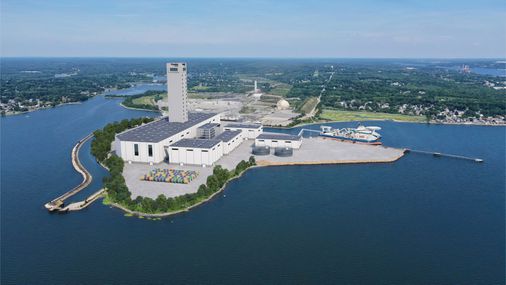 Coal in the wind. The site of the former south coast power plant will become a key point for the offshore wind industry

The project would be the first major manufacturing operation in Massachusetts to emerge from this nascent industry, after state officials orchestrated a series of long-term contracts between wind farm developers and major power utilities. . Prysmian plans to invest $250 million to $300 million in the plant, executive vice president Hakan Ozmen told the crowd, and employ up to 250 people, with scope for significant expansion.

“This whole process has been a team sport,” Governor Charlie Baker said. “For those who have been involved in these activities over the past seven years, getting to this point is a particularly significant milestone.”

Prysmian decided to build the plant because its wind partner, Avangrid Renewables, won contracts in December to supply more than 1,200 megawatts of electricity to Massachusetts, enough power for more than 600,000 homes. Avangrid will provide this energy by constructing the Commonwealth Wind project 20 miles south of Martha’s Vineyard, in waters near where Avangrid is developing the Vineyard Wind project as a joint venture.

Ozmen said the purchase of the Brayton Point land from Commercial Development Co. was contingent on obtaining a permit for the plant. This process could take up to 18 months, he said, and construction could then take up to two years. (Prysmian also employs 200 to 400 people, depending on workload, at a cable factory near Dighton.)

“It’s more than just a project,” said Dennis Arriola, CEO of Avangrid, in an interview. “It’s the creation of an industry. It is the creation of a new workforce that could be deployed and transitioned from the old economy to the new.

Prior to its closure in 2017, the coal-fired Brayton Point Generating Station was one of the largest power stations in New England. From now on, the site will be essential for a new sector of the energy industry. It would also help another offshore wind farm – one owned by European energy companies Shell, EDP Renewables and Engie. That project, Mayflower Wind, won contracts in December to generate 400 megawatts for Massachusetts, bringing the wind farm’s total generating capacity to 1,200 megawatts. Mayflower Wind, whose turbines would rise in waters southeast of Avangrid’s projects, would use Brayton Point to connect to the region’s power grid, via an undersea cable more than 90 miles long. The ports of Salem and New Bedford will also play a key role in the construction of these projects.

“If we continue to play our cards right, we can make a very big investment in the Commonwealth and this region in the future, and support a lot of deep-sea activity along the Atlantic coast,” Baker said.

Taken together, Mayflower Wind, Commonwealth Wind and Vineyard Wind could collectively generate 3,200 megawatts, enough to meet about a quarter of Massachusetts’ electricity demand. Of these, Vineyard Wind is the most advanced, with the goal of producing electricity within two years.

These projects were made possible by a 2016 law passed by the Massachusetts legislature to spur massive clean energy contracts for offshore wind and Canadian hydroelectricity, to help the state meet its ambitious carbon reduction goals. emissions and to provide additional power to a network that needs it. especially cold days. Several other East Coast states have since entered the hunt for offshore wind power and jobs, with New York and New Jersey leading the way.

State Rep. Pat Haddad, whose Somerset town was home to Brayton Point and another closed coal plant, was instrumental in persuading his colleagues of the importance of supporting offshore wind, in part to address to the economic blow that occurred when the power stations were closed.

At Thursday’s event with Baker, Haddad struggled to hold back tears as she looked out and saw that this effort she started many years ago was finally paying off.

“To say it’s been a long time coming is a huge understatement,” Haddad said.