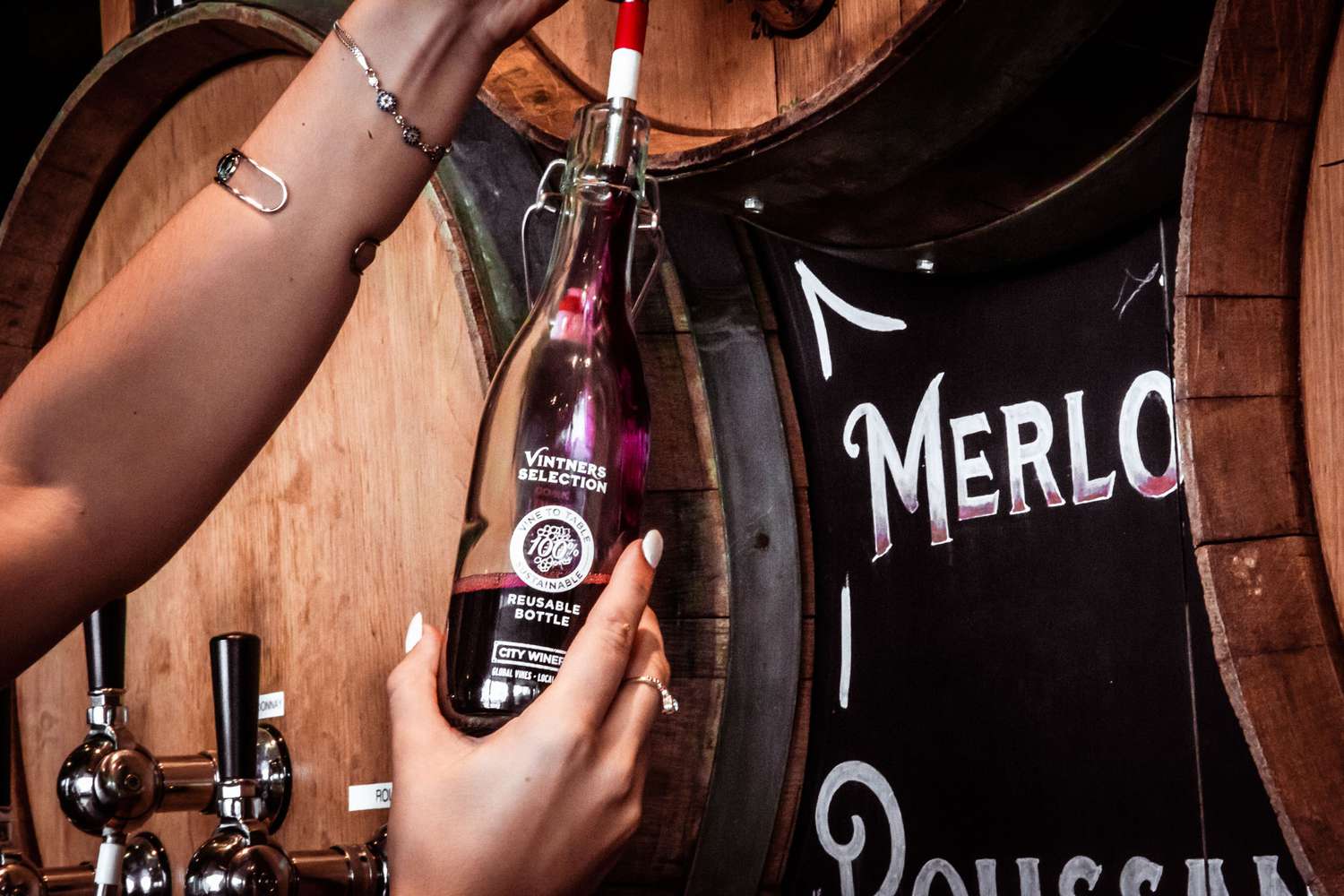 Manhattan’s only operating winery has won a tender to open its 13th location in historic Grand Central Station, where the brand will launch a wine growler exchange system for commuters on November 21.

News brings much-needed wine bar to transit hub for 250,000 daily commuters, nearly 70% of whom rely on Metro-North to get to and from the town ⁠— including me recently. I can attest that despite having 35 food vendors, the resort has few options for a nice glass of wine when you’ve missed your form two seconds.

“For lack of choice, beer has become the easiest container to fill, put a brown bag around and take a train,” City Winery founder Michael Dorf said of those commuters when he landed in coveted space. “Every day you have people dragging that glass of something to drink as they go home from work.”

His team imagined it would be ideal to offer mini wine bottles as an alternative and researched cans and other container options. “The problem with vessels in the American wine industry is that none of them are really durable or really reusable,” Dorf said. “That’s how we created this growler program.”

The music fan who opened his original Manhattan urban winery in 2008 has plenty of experience testing new ideas. His original vision of selling casks to bankers who could be part of the process and develop their own label was thwarted by the financial crisis of that year.

“It evolved and quickly turned into a concert space, which was my backup to sell liquor, but then to really move it into a program by the glass,” Dorf explained. “It’s not officially straight out of the barrel…we move it into stainless steel barrels and then hide the tap behind beautiful wooden barrel heads, but the idea is this: it’s never seen of bottle. We are able to serve very fresh, very efficient and frankly very long-lasting wine. In 14 years at 12 locations, he estimated they had served 2 million glasses of wine without glass bottles.

Dorf explained that this saves dozens of semi-loads of glass from being shipped from Mexico or Germany to California, and while viewers tip the scales through a continuous supply of Riedel glassware, the format reduces carbon consumption. He admitted that the 5-cent US incentive wasn’t enough to stop people throwing away glass bottles, so City Winery is offering $5 for returns. The 375ml bottles can hold around two glasses of wine for around $15 each, so if commuters get the hang of it, they’ll have two $5 glasses of wine to enjoy on the ride.

“You turn in three and you get a free bottle of wine. Grand Central gives us this opportunity to do a pick up and drop off ⁠—a true gas station concept ⁠⁠—,” Dorf said, noting that regulations prevent liquor container refills, but City Winery will sanitize and reuse. returned bottles. Nine varieties of wine, including Riesling, Sauvignon Blanc and Pinot Noir, will be available in 375ml and 750ml bottles for $15 to $35.

“We really are the first serious bottle reuse program in the country,” Dorf said. “And although we are a very small wine company, we hope that this concept can catch on with large companies, distributors and other sites. A transit hub is certainly very easy to operate the model. »

RELATED: 19 of the best sustainably-raised wines to drink now

Not to mention a great spot for the wine-on-draft format, which will host 190 guests at City Winery Grand Central with two tasting bars among the venue’s signature live music (and events like Bordeaux and burger pairings). Perhaps most appealing to locals who have seen many concepts (like Claus Meyer’s Great Northern Food Hall and fine dining restaurant Agern) come and go in this space is the inclusion of take-out home offerings at breakfast -breakfast, lunch and dinner at City Jams and dinner at a 75-seat farm-to-table restaurant, by reservation only, called Cornelius.

“We try to be utilitarian and use the space that’s been given to us,” Dorf said. “Not everyone can sit down and drink a glass of wine every day, but maybe they want to pack a growler and a bag of corn nuts and risotto dumplings. I’m super excited about of my homemade protein bar. That’s what I want for breakfast with a cup of coffee.

After many early morning train rides, alternating between the three or four breakfast vendors with long queues and service seemingly unaware of customers racing against train times, I cannot not express how welcome this is. City Jams will open at 6am weekdays and Dorf assured me there will be a sense of urgency. “We’ve never really been to a transit center, but the City Winery concert hall is more like a transit center than a relaxing setting anyway. You get 350 people arriving in the hour before the show ⁠—that’s peak time in our venues. So we’re used to bringing out lots of food, lots of wine and drinks, and having service as fast as possible. We’re pretty well suited for a transit hub and a rush hour mentality.

RELATED: NYC gets its first Hawker Center – with vendors coming straight from Singapore

The entire concept will celebrate Grand Central’s history, a treat for locals and visitors alike. “The MTA was looking for us to remove some of the obstruction so you could see the beauty of the old waiting room. We actually recreated and used some of the furniture from the waiting room so it had this,” Dorf described, adding that the restaurant ⁠—named after Cornelius Vanderbilt, the railroad magnate who pioneered Grand Central Depot ⁠—will feature artwork from days gone by.

“We looked at the space we were able to gain and thought, ‘OK, previous users have invested a lot of money in a huge, world-class kitchen.’ They’ve spent several million dollars building a kitchen that connects to a fairly intimate restaurant,” Dorf said. “Cornelius is definitely a more relaxed experience; it’s a sit-down destination restaurant.

Executive chef Zachary Bondy crafts dishes that pay homage to what he calls “first-class rail travel at the turn of the 20th century,” like Vanderbilt oysters and Oscar tenderloin, using local ingredients like Hudson Valley Ranch. The restaurant will feature a wine list of approximately 200 bottles from City Winery’s cellars to complement its proprietary wines that are not made to age.

“We are a local business. When you get a glass of Pinot Noir, we tell you exactly where it came from,” Dorf said. “We source Pinot from three main regions in the United States: Sonoma Coast, Russian River Valley and Willamette Valley. We work with very good farmers, vineyards and wineries. We are privileged to be able to buy their grapes.

And this AVA will be displayed on every growler label. The self-proclaimed scrappy entrepreneur using hydroelectricity in the Hudson Valley and saving the planet from millions of corks has yet to see if New Yorkers will return the glass bottles, but he’s betting on the same vision.

“Fifteen years ago I wanted a music club where I could hold my Rolling Rock in one hand and enjoy the music,” Dorf reflected on his original concept, the Knitting Factory. “When I go to takeout, I’d rather have this really nice, hand-wrapped, homemade protein granola bar than the one that’s wrapped and processed. This is going to be my go-to. I want my craft wine from a place that actually knows where the grapes come from vs. a cup with an aluminum top that may be very handy and I’m going to throw away…I hope there’s enough of people who care about things that look like me and that connect.

It has this private wine commuter on board.