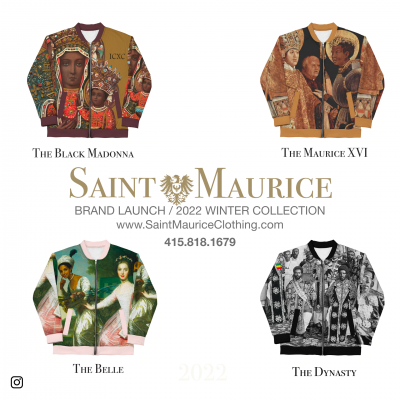 Jackets adorned with historical paintings of Classical and Renaissance Blacks/POCs are shaking up the fashion industry.

(Black PR Wire) “In a nutshell, we make apparel and accessories for the world’s proud citizens of color,” says Ellias Kenneth Fullmore, founder of Oakland-based fashion startup Saint Maurice. The brand takes its name from the 3rd Nubian center leader of a Roman legion and patron saint of Imperial Germany. “I think Black people and POC want to see something different. I decided to make clothes that showcase the contributions of people of color in the development of Western civilization and world history. We don’t really focus on “black history” as it’s commonly taught. Rather, we aim to recontextualize the representation of black and brown people in world history, so that people look and feel good about themselves.

The highlight of the winter collection is a series of lightweight bomber jackets depicting historically significant images of black people:

The Black Madonna: This jacket features the image of the Black Madonna of Częstochowa, a 14th-century Polish relic depicting a black Virgin Mary and her child

The Dynasty: This austere jacket, mostly in black and white, displays several royal members of the royal court of the Ethiopian Solomonic dynasty between the 19th and 20th centuries. Prominent are Emperors Haile Selassie I and Menelik II.

“That’s just the tip of the iceberg,” says Fullmore, a Morehouse graduate and bioinformatics software designer in Silicon Valley. “I want everyone to wonder why we didn’t learn this stuff in school. We all know the answer. I really really like people asking this question.