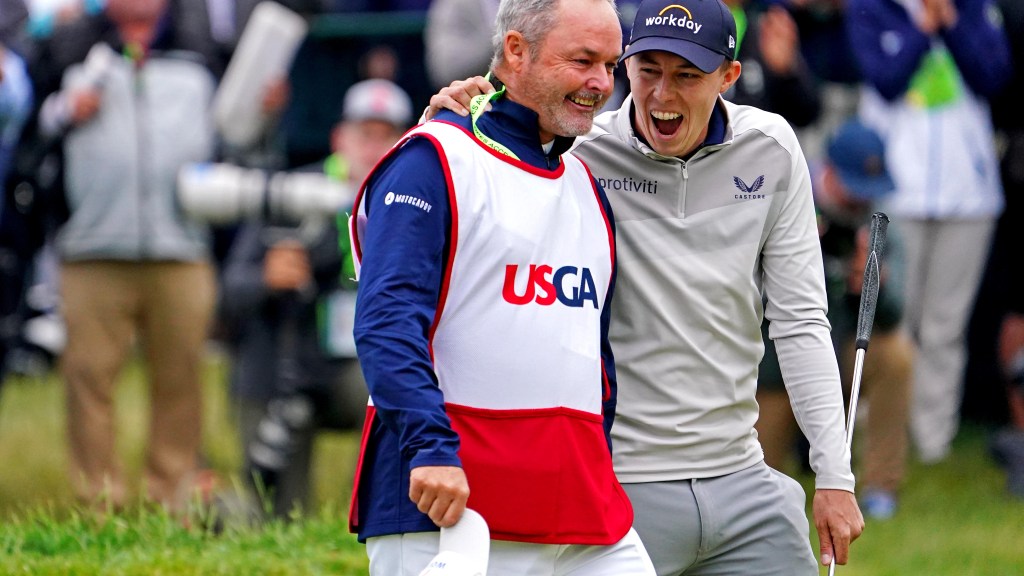 In March at the Valspar Championship, Billy Foster bragged that he had caddyed for 45 winners during his 40 years on the bag. That’s quite a tally of wins, but it didn’t include a single major. Asked by a reporter about his victory flags, the unofficial winning looper trophy, Foster barked, “I don’t collect them. Never kept. I have no interest in it.”

Ah, but that was before Foster finally had the bag of a great champion at 122n/a US Open in Brookline, Massachusetts. When Will Zalatoris narrowly missed his birdie putt at 18, England’s Matt Fitzpatrick became US Open champion at the Country Club. With teary eyes, Foster approached the pin and kissed the bottom right corner of the flag at 18. This one was different. This one meant everything.

“I blew a gorilla back. Not a monkey, but a gorilla,” he told Golf Channel shortly after his back became much lighter.

Chances are the flag of his 46e career victory can be buried with him when the 59-year-old Englishman breathes his last.

“It means the world to Billy,” Fitzpatrick said. “I know it’s something he’s wanted for a long, long time. Doing it today is amazing.

Finally. Just think of 40 years, in the neighborhood of 160 majors working for Seve Ballesteros, Thomas Bjorn, Darren Clarke and Lee Westwood before him. So many close calls. Bjorn the Great Dane should have won the 2003 British Open at Sandwich but needed three shots from a greenside bunker at 16e hole, made a double bogey and packed the Claret Jug to surprise winner Ben Curtis.

“I thought about it every day for six months,” Foster said in a recent interview with the Caddy Network.

With Foster on the bag, Westwood reached world No. 1, but Foster reckons there were at least three or four golden opportunities in the majors wasted – from taking three putts to the last at the British 2009 to Turnberry at the magic shot of Phil Mickelson from pine straw at 13 at the 2010 Masters and letting Danny Willett sprint ahead of him at the 2016 Masters. There was also the heartache of being T-4 heading into the final round of the 2016 US Open at Oakmont and having to watch Westwood spill the beans and close in 80. If Fitzpatrick could have putted for Westwood, Foster figures they would have won six or seven majors.

Foster and Westwood split in 2018 and Fitzpatrick found himself between the caddies.

“It’s so funny,” Fitzpatrick said. “He kept telling me the first time he worked, ‘I’m just going to do 25 weeks and maybe get a replacement for the others.’ I think he’s had about two weeks off in four years.

Foster is a legend in the cadet ranks, a master storyteller who can impersonate Ballesteros to perfection. He has been a caddy in a record 14 Ryder Cups – he would have been 15 but missed 2012 through injury – dating back to 1987 at Muirfield Village, the first time Europe won on American soil. He worked that week for Gordon Brand Jr. He even caddyed at a 2005 Presidents Cup for Tiger Woods, replacing Steve Williams, whose fiancée at the time was expecting their first child. Foster is arguably Europe’s most respected caddy and all that was missing from his CV was caddying for a big winner. He knows his job and he knows his place.

In Fitzpatrick, he was convinced he had a player with all the attributes to become a big winner. Despite another close call for the PGA Championship last month when Fitzpatrick finished T-3, Foster’s resolve was never shaken that his boss was ready to win one of golf’s greatest titles.

“I knew he was good enough to win a major and this week he played amazing,” Foster said. “It put a lot of bad memories to bed. It means everything.

“He is a voice of reason and a voice of authority among caddie authority,” Golf Channel’s Paul McGinley said. “I’m really happy for him because he’s had an amazing career. … He hadn’t been with a player who won a major. This is no longer the case. That’s why we’re all happy for him.

The gorilla is on its back and Foster is ready to celebrate.

“Tonight and next week, I’ll probably have a liver like a football,” he said.

In pictures: here are 60 photos that give an idea of ​​the bustling opening days of Documenta 15 in Kassel